The development of the road was determined by two factors:

the Kennet & Avon Canal, which reached the old road to Claverton
(now called Bathwick Hill) in 1800 and then opened through to the Avon
in November 1810, and the residential development of the
Bathwick area.

Click on the image to see an enlarged section

By 1840 the Tithe map shows
the ownership of plots extending
on the west side beyond the last Georgian house.

Click on the image to see the map enlarged

As well as dwellings, the early development
was important in supplying wharves and storage yards for the building
work. Later on in the century many of the temporary constructions
were replaced by houses, and given names rather than numbers
in the road.

On the east side, Darlington Cottage is shown opposite numbers
6 and 7, and is still there today, an anomaly among the more formal
Georgian and Victorian houses. 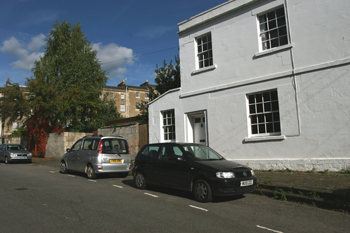 Darlington Cottage as it is today

Opposite the cut stood Bathwick Farm, listed in the Post Office
Directories as a dairy from 1856 to 1876. The farm has been replaced
by what is now 21 Darlington Place. Beyond this was, and still is,
Smallcombe Farm and then Sydney Cottage, which would become Smallcombe
Nurseries in the 1920s.

Smallcombe Cemetery, at the southern end of the road, was opened in 1856 and
many former residents are buried there. 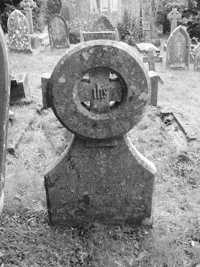 In 1902, in order to establish a sensible
numbering system for the road, the houses were renumbered from
1 to 54. As there was still some free land available between existing
houses, numbers 11, 43, 44 and 53 were not allocated. With the
exception of 53, where a block of three flats was built in the late
1960s, the numbers are still not allocated today.

Click on the image to see the page enlarged

In 1932 permission was given to build 8 houses
beyond No 54. These were built as separate dwellings, but the addition
of garages and sheds mean that today many appear to be joined.

Sydney Buildings did not receive a direct hit during World War II
but those years were hard on the buildings and their inhabitants. Many
of the railings and window boxes disappeared into the war effort and
several families were now living in what had been a one family home. The last house in the road, No 63, was built in 1979. The two remaining
industrial buildings are still businesses, with an architectural practice and a
Planning Consultancy at the Malt House, and another architectural practice
in what was the Somerset Coalhouse, No 23a.

In recent times there has been considerable investment put into the
conservation and maintenance of the buildings, by the owners, to make
the road what it is today.